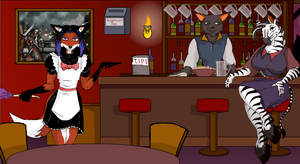 Initial scene of the bar at High Tail Hall

High Tail Hall began its existence as a discussion on the Yiffstar messageboards. Crowchild, the creator of Pendragon Entertainment, announced he would be making a flash akin to The Tail Underground, seeing as updates to it were sporadic at best. This announcement included a statement that people who wished to be in the animation need only ask.

Some time after the announcement, the finished product, version 1.5, was released.

(Note: These are the characters that appear in Version 1.5. Characters from Version 1.7 are not included on this list.)

Version 1.7 offered the opportunity to add your own character/fursona to the game engine for a fee. Unfortunately, a fire broke out in the Pendragon Entertainment studio, destroying the computer with all the commissions on it, and causing thousands of dollars worth of damage to the building.Modèle:Fact

All Pendragon Entertainment projects were suspended, but full refunds were given to everyone who commissioned a character. The improvements that were being added to version 1.7 were:

1.7 was recently dropped, and now only exists in an archived version.

High Tail Hall 2.0 is the latest installment of the HTC series; as in the prior settings, a player can explore the newly renovated "High Tail Hall" strip club and bar, which has undergone some extreme renovations.

From March 2008 to December 2008, several new characters with numerous new adult character-to-player-to-character interactions have been constantly added to the game's content. This update process did not occur in 2009.

New areas of the game can be seen in the overview map, but are currently offline, so the character is limited to certain zones, characters and interactions

Beta scene of the bar in High Tail Hall Classic

On Halloween 2007, Crowchild released an image of the beta of the bar scene and a sound test of Max from an upcoming remake of High Tail Hall 1, currently titled High Tail Hall Classic.

HTHC will be total remake of the original game, and will feature the updated character models from HTH 2.0. It will also include voice acting.

The game currently has no set release date, and will be released onto Fur Affinity and Newgrounds.

A fan created spinoff of the original High Tail Hall is on the works, being designed by an artist by the name Jack Salem, which will consist of established and new characters and locations. It has been announced that there will be approximately 12 female characters, and 6 different places to explore, as well as an in-depth plot.Modèle:Fact

As far as male characters, only one has been announced, and recently it was also announced that this version of the game is focused around heterosexual relations only. There will be a music score, mostly jazz tracks, written by Jack himself. This project was announced in 2006, with the only releases so far being images of characters and as of Christmas Day 2006, a Beta Preview with animation.Modèle:Fact

Jack has stated that he is indeed working on the project to the message-board Yiffstar, where the project was first announced.

Jack has started a commission service as a mini-fund raiser to support the re-creation of the Twilight Cavern Flash project, as posted in the miscellaneous Sub-forum at the Yiffstar community. He is establishing a new website and will be taking commissions for new characters shortly.

OpenHTH is an open source (as open as flash files can be) project based around High Tail Hall 1.7, the goal is to vastly improve the game, by enhancing existing content, but also adding to it.

The current version of OpenHTH is 1.0.2 which so far is only dialogue enhancements, replacing incorrect spelling and grammar, and typographical mistakes in the original HTH 1.7, some ambient music, and a few background animation enhancements.

Users are welcome to download the latest version and help add or enhance it, or download the base version (which is just the editable flash files of HTH 1.7) and try their hand at doing their own mod.

Then finally it's finished, or is it? No not really, that 6 phase process can be repeated as many times, and with each lot of 6 phases can add as little or as much content as we please at the time.

Users can and are encouraged to contribute to this process, and critique upon whatever we have at any given point in time on the OpenHTH forums.

Early versions of High Tail Hall prior to version 1.1 included an uncredited clip of Depeche Mode's song "Personal Jesus." This clip was removed from 1.2 on.